I said yesterday I’d post of happier topics. So what pops into what is quickly becoming my new newsfeed?

The American Supreme Court has judged that the constitution guarantees the right to Equal Marriage!
(Ignore the fact that article uses the term “gay marriage” and “same-sex marriage” instead of Equal Marriage).

While yeah, I’m in Scotland (we’ve had “gay” marriage for all of six months now), it’s kind of cool that today we’ve turned another corner towards, you know, actual equality. Now if we could make people call it Equal Marriage instead of Gay Marriage, we’d be on to something.

So  while we’re at it, I thought I’d post some things that make feel that “gay” thing in a whole other way. That’s right. I’m talking about HAPPY! (Hey look I made a really bad joke).

I’ve had rats – three girls – now for just over a year. It’s my first time having pets since I moved out of my parents at 21 and sometimes, yeah, it’ pretty scary. It’s changed my life in ways I didn’t really consider before I got them (“no I can’t stay out I have to go feed my rats”) but it’s also improved my life in a lot of ways.

I bought a whole load of new rat toys recently, and have been having fun researching ways I can entertain them for little money. They sit in the same room as me when I’m on my computer, and it’s fun to look over and see the things they get up to. 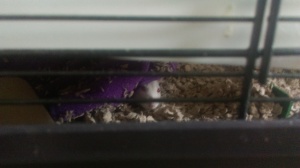 There’s only two in the photos above because the third was hiding under a blanket at the bottom of the cage. She’s also been making what appears to be sculptures out of toilet rolls at the bottom of the cage, but they’re under the platform so it’s hard to take photos. I’m going to give her more and see what she gets up to with them before I insist on photographing her creativity!

(P.S. They are named after the Cutie Mark Crusaders in My Little Pony: Friendship is Magic).

There is nothing better, in my mind, than a good hoodie when you feel like junk. I have an oversided “FAIL” hoodie that I lurk around my flat in, and I have a Sweetiebelle “Dumb Fabric” Hoodie (I can only find the t-shirt design on We Love Fine right now, not the hoodie. Sorry!) for when I’m out and about.

I do have others, but those are my two favourites. I’m in need of more.

I think it’s becoming painfully obvious by now; I’m a massive fan of the fourth generation My Little Pony cartoon. Brony’s get a bad rap on the internet – don’t get me wrong, when I look at some parts of the fandom I can see why.

But I have also walked down the street in my Sweetiebelle Hoodie, spied someone in a 20% Cooler Rainbow Dash t-shirt, fist-bumped them (brohoof) silently, and continued walking. There’s not many other communities I’ve been in where there’s that level of solidarity outside protesting circles.

I have a Pinkie Pie phone background that a friend drew for me. They’re one of my favourite artists, and for a long time, every time I looked at my phone I couldn’t help but physically squee with happiness. It still makes me happy to look at it!

Being an artist myself, there’s a sense of excitement every time I buy new materials, even if it’s just a specific pen I like or new sketching pencils! My current love is Molotow One4All paint markers!

Things that make me happy.